I had mentioned in my previous post of how I haven’t been face-to-face, in the non-virtual sense, with my CD/TG support group since last February.  The LGBT+ support center where we usually meet, OutReach, has, during this dreaded pandemic, barred walk-in visitors and suspended in-person meetings by support and social groups who use their offices for meetings.  It’s an effort on OutReach’s part “to protect the health of our clients, volunteers, and staff,” and by extension the rest of the Madison community, as much as possible.

END_OF_DOCUMENT_TOKEN_TO_BE_REPLACED

For all that’s been going on, there’s been one thing you haven’t seen a lot of on here:  New photos of yours truly.  For sure, 2020 has not put anyone in a joyous mood.  And for me, the fear and worry of this year has dampened my urge to dress up, apply makeup, and pose for the camera.

But it’s not as if I’ve never done any of that since last year. 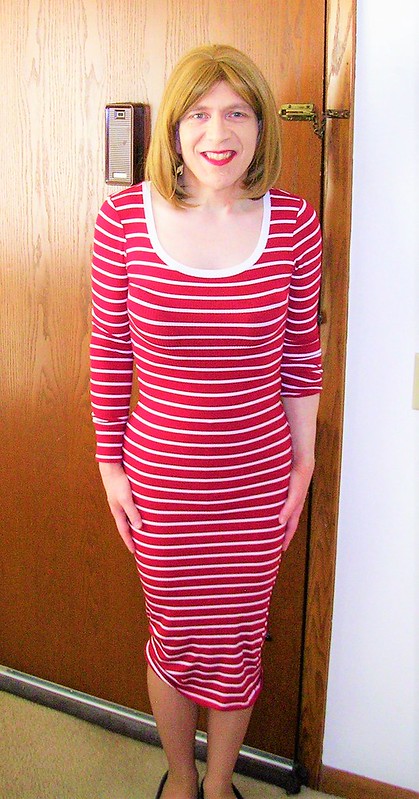 This, gentlemen and ladies and gender nonconforming, is yours truly in mid-May, sporting a red-and-white long-sleeved, well-past-the-knees dress I spotted at Forever 21 almost one year ago (along with a similar dress I wore on my 50th birthday).

END_OF_DOCUMENT_TOKEN_TO_BE_REPLACED

It’s still June, and it’s still Pride Month.  And while, for understandable reasons, many extravagantly-constructed Pride celebrations have been few and far between this month, it’s not as if the LGBT community’s biggest month hasn’t gone unrecognized.  I mean, earlier this month in at least Madison and Los Angeles, relatively last-minute rallies have taken place to celebrate Black LGBT+ peoples.

Still, it’s likely that due to the virus that’s going around, lots of Pride festivities have either been postponed or cancelled.  For sure, Milwaukee’s PrideFest was scrubbed from last weekend’s calendar.  And here in Madison, Magic Pride Festival would’ve taken place in the flesh this August, but instead will be a virtual event.  (Bummer.)

Happy #PrideMonth 🌈 Your true colors are beautiful. The Wisconsin Union family welcomes you today and every day as you are

Back on June 12, a couple of days after Overture Center did the all-rainbow thing, the UW—Madison’s Memorial Union (they of the famous sunburst terrace chairs) bathed their building in solid colors in recognition of Pride Month.  At that point, Memorial Union was closed as an anti-virus precaution (they’ll begin a phased opening tomorrow).  But just as with Overture’s well-intentioned display, the Union wanted to do theirs before June was out, and theirs was… well, not underwhelming.  I hate to play favorites on this, but the Union’s display ran circles around Overture’s.

Regardless of the simplicity or quality, however, these displays can’t go unappreciated.  And right now, even though the broad LGBT+ community has made so many advancements, there’s a still a need for those to say, in one form or another, “We see how beautiful you are.”

For me, the month of June usually, more often than not, puts me in a good mood.  This is the month of the summer solstice after all, and like most of you I always enjoy the warmer (though not too hot) temperatures and abundant amounts of sunshine that come with summertime.  The higher the sun’s angle is, the happier the human being’s mood can be.

END_OF_DOCUMENT_TOKEN_TO_BE_REPLACED

Four years ago, I sung the praises of an advertisement that PFLAG Canada put out to promote and support legal marriage equality worldwide.  The ad was titled “Nobody’s Memories,” and it depicted images of what could have been:  Weddings of same-gender couples from the mid-20th century, shown as home movie footage from an “alternate universe” that gives the viewer chills with their authentic aged styles.  If you want to learn what I’m talking about, check out this blog link to take a look at it yourself; I just watched it again myself and am still struck by how powerful and moving that ad still is.

This week, a news item in the showbiz world made me recall that “Nobody’s Memories” ad and its (*sigh*) imaginary depictions of couples who just happen to be of the same gender in real love.  I’ll talk up that TV item in a bit, but while doing some research on it, I went further down the internet rabbit hole and came across this photo of an actual wedding memory that did happen:

The above photo, as confirmed in this 2014 Houston Chronicle article, is from a small ceremony that took place at Harmony Wedding Chapel in Houston in October 1972.  The groom is Antonio Molina, a shipping clerk, former high school football star, and Navy veteran.  The resplendent bride is William “Billie” Ert, a female impersonator (stage name: “Mr. Vicki Carr”) and former hairdresser.  Yes, William Ert was a male, but he had a voter registration card that listed his gender as “female.”

END_OF_DOCUMENT_TOKEN_TO_BE_REPLACED 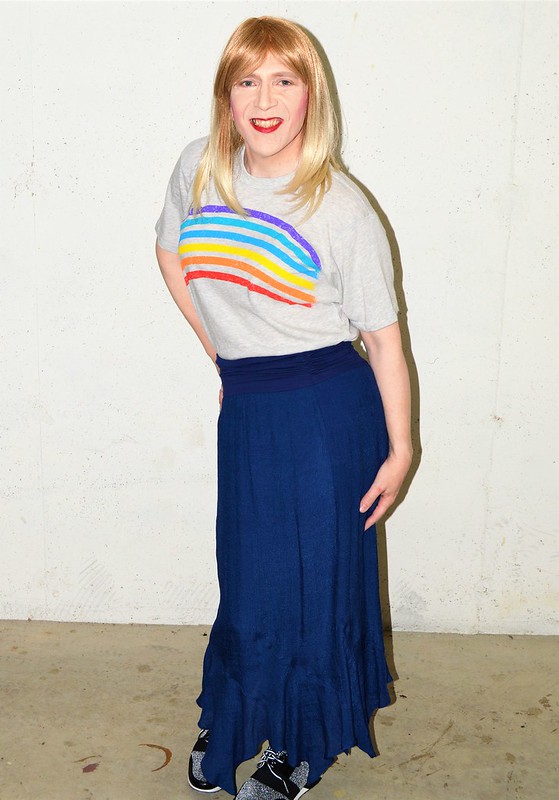 The other day, with a thunderstorm ruining my plans to venture out en femme, I decided instead to head down to my building’s basement.  It’s obviously not the most glamorous locale in my building, let alone the world, but the pale color of the concrete walls that help keep our apartments upright are a nice background for a fashion shoot.

And just what am I wearing here?  Well, let’s start off with the skirt.  Back at Christmastime, I received a nice gift card from Kohl’s department stores.  With the $40 on that card burning a big hole in my wallet by the time spring rolled around, I figured it would be a nice way to help build the summertime portion of my feminine wardrobe.  Luckily, I found a perfect addition in this navy blue Apt. 9 maxi-skirt.

END_OF_DOCUMENT_TOKEN_TO_BE_REPLACED

I haven’t been on here the past several days, what with trying to earn a living and fighting an achy cold since Thursday.  But I’m back to share some lingering stuff related to my last post about the Victoria’s Secret Fashion Show, and more importantly comments by Victoria’s Secret’s chief marketing officer, Ed Razek, expressing that the show has no place for “transsexuals” (his term) or plus-size models on the catwalk (“because the show is a fantasy,” he reasoned).

Well, any hope that Victoria’s Secret and ABC would generate great ratings for the 2018 edition of the fashion show turned out to be a bigger fantasy.  Last Sunday’s (December 2) airing of the event registered an all-time low viewership number.  And that’s coming off previous all-time lows for viewership in both 2017 and 2016, the last two years the event aired on CBS.

END_OF_DOCUMENT_TOKEN_TO_BE_REPLACED

If I haven’t said so in specific terms before, you’ve likely gained the impression on here that it’s always a thrill for me to get dressed up and venture outside my house as Allison.  And while I’m one who normally likes the intimacy of small groups, an awesome feeling always surfaces in me when en femme in a large congregation of people.  Such was the case again last Friday evening:

OutReach, the LGBT+ support center here in Madison, staged its annual awards banquet last week. at the Monona Terrace Community & Convention Center.  As the name implies, the event is a combination of a fine meal, friendly conversation, and awards to those who promote equality and quality of life for the LGBT+ community.

END_OF_DOCUMENT_TOKEN_TO_BE_REPLACED

Okay, I promised some stuff I had left over from but didn’t have room in my last post about the 2018 OutReach Pride Parade & Rally that occurred last Sunday (August 19).  Unlike that previous post, I promise I won’t even bring up the controversy that surrounded the parade this year.  Nope, this will be all positive.  The first thing is that though some of the same socialists who despised the police being at pride also despised the presence of corporate sponsorship (no, I’m not gonna get any darker than that in this post), there was, without mistake, a sincere presence of businesses who wanted to show their support of the LGBT+ community.  Just as with the charities, non-profit organizations, and church and advocacy groups that also populated the parade, they made it known that they truly support our community and do not venture to discriminate against us.  That they also do so with their checkbooks and accountants through their sponsorship of Pride does not (and should not) hurt, no matter what your level of disdain of the corporate world.  And, yes, sometimes I do think this world has gotten all-corporate, if you know what I mean.  Still, I do understand the necessity of having a benevolent, philanthropic sponsor offering cash. END_OF_DOCUMENT_TOKEN_TO_BE_REPLACED

It’s been a full week, one that’s been somewhat busy and very wet, since the OutReach Pride Parade & Rally, but I’m finally ready to share with you some of my experience.  As I’ve mentioned here and here, this year’s parade and rally was held under an ugly shadow, not from any rain clouds but under the specter of controversy.  A loud contingent from Madison’s LGBT+ community raised a ruckus over the presence of the Madison Police Department at the parade, with some threatening to stage a counter-protest.  In the end, parade organizers withdrew the applications of LGBT+ employee resource groups from MPD and UW—Madison Police as well as the Dane County Sheriff.  Members from those groups could (and did) march in the parade, but had to do so unarmed and out of uniform.  (Side note:  The Madison Fire Department decided to withdraw one of their engines from the parade in sympathy to the boys in blue; it was MFD’s decision.)  While OutReach’s move to formally eliminate the police entries upset some parade supporters and still likely upset some protesters (especially since the parade permit still required MPD to provide security), the parade and rally (**SPOILER ALERT**) went off without a hitch and without any rabble-rousers causing disruptions.