It’s nice to think about it, maybe even visit
But I wonder, could I live there anymore?
— Charley Pride

Now that you’ve read about how I spent last Sunday (“A really exciting topic”… said Allison, sarcastically), let me tell you about last Saturday.  That was when I got in my car, made the long trip to far Northeast Wisconsin, and got to be with my family for the first time since Christmas.  Every spring, on or around Easter weekend, my youngest sister and her husband invite the immediate family to her place for a semi-informal sit-down dinner of ham, potatoes (the cheesy kind), watching viral videos on the big-screen TV in the den (well, the kids do that), and lots and lots of catching up.

END_OF_DOCUMENT_TOKEN_TO_BE_REPLACED

This post and the one I will publish next will both deal with the realm of television.  Initially, I had planned to lump both into one big post.  But the story in this space is so lengthy that I don’t want to overshadow the thoughts I will include in the next post… especially since they’ll be about crossdressing on television.  But, oh, do I have a “buyer beware” type of story to tell here.

END_OF_DOCUMENT_TOKEN_TO_BE_REPLACED

One day last week, while making a quick check of my social media accounts, I noticed that one of my Facebook friends mentioned receiving a certain something.  No, it wasn’t a package or gift, but rather something they were dreading to receive all their adult life so far and would loved to have avoided.  That something was… an official summons to appear in court for jury duty.  [*insert suspenseful music here*]

END_OF_DOCUMENT_TOKEN_TO_BE_REPLACED

Two years ago on Friday, just five minutes into my work day, I was led to the Human Resources department and was told my position was being eliminated.  In other words, I was out of a job.  I can still recall wearing that day one of my better-fitting (for me) white dress shirts, along with a sky blue tie.  At least I think the tie was sky blue.  I can’t recall that for sure because that day was the last I wore either of them.  In my want to not be constantly remembered about that sad day, I would donate both of them, along with other items emblazoned with my ex-company’s name, to a Goodwill donation center… located 90 minutes away from Madison.

END_OF_DOCUMENT_TOKEN_TO_BE_REPLACED

With 2019 about to conclude, it’s the perfect time for me to pick up on a social media trend that piqued everyone’s interest way back in January.  Perhaps you remember the so-called “ten-year challenge,” better known by its #2009vs2019 hashtag.  The premise was simple enough:  Post two pictures of yourself, one from 2009 and one from this year; add the appropriate hashtag; perhaps add a snide comment; and let the comments of others complimenting/guffawing/etc. about how you’ve changed flow over you like a river.

END_OF_DOCUMENT_TOKEN_TO_BE_REPLACED

There’s an anniversary in our family this week that I imagine we’ve forgotten about because we’ve been so busy.  I didn’t, however, although for a moment I forgot exactly which day it occurred.  For sure, though, it was in the month of May.  And definitely for sure, it occurred 20 years ago today (May 16, 1999).  This was the day that the older of my two sisters graduated from college.

Sis has been in the health care world for her entire professional life, and during the 1990s she went for further schooling, starting out at UW—Green Bay for a couple of semesters before transferring to UW—Madison.  And 20 years ago, our entire family spent the weekend herein Madison, where we all saw Sis walk up to that stage, grab that diploma, and turn her tassel from right to left.

END_OF_DOCUMENT_TOKEN_TO_BE_REPLACED

About 20 years ago, when I was in a previous place of employment in another town, I had for a colleague someone who was, at least from the interactions I recall having with her, someone with quite an outgoing personality.  I don’t remember her name, but I’ll just call her Roz for the sake of reference.  Roz was friendly, but she could be brash.  Roz was admittedly not perfect, but she radiated overconfidence.  And Roz knew what she wanted to say, even if it meant saying it at the wrong time or setting.

Looking back on it, I admit I had a tendency to overlook all of Roz’s personality shortcomings and appreciate the fact that she did the work that needed to be done.  Then again, so did our teammates, at least a couple of whom voiced their disgust of Roz to me in confidence.  She’s lackadaisical, they’d tell me.  She’s always on her cell phone at work.  She’s not keeping up on her tasks.  She makes quite a lot of errors.  She’s a drag on our team.  And I knew they were right, for at that time I routinely cared for our supervisor’s production reports and noticed that Roz was frequently on the low end of production and accuracy. END_OF_DOCUMENT_TOKEN_TO_BE_REPLACED

Does this photo ring a bell, faithful readers? 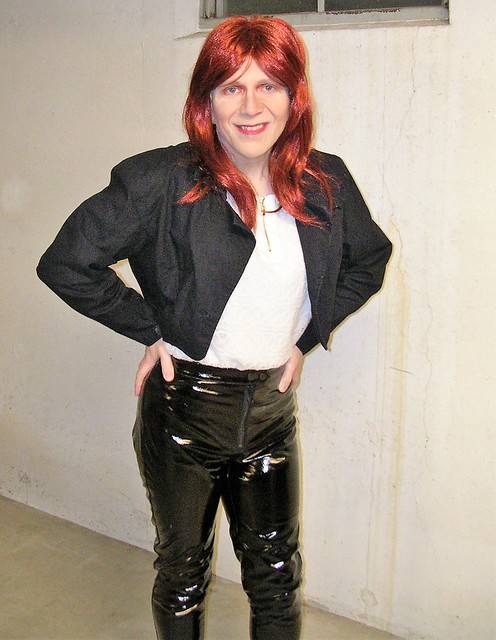 If you read this post from last year, or if you’ve ever perused through my Flickr album, you probably remember seeing the above outfit, and in particular the black jacket I’m sporting.  The black-colored Gitano cotton jacket is probably the oldest item still in my female clothing closet.  I found it way back in 1992 in the youth/young adults section of the Shopko department store down the road from where I lived.

If you’ve also read my previous post, you’ve learned that Shopko is in a bit of a financial bind.  Shopko is a department store chain, established and based in Green Bay, that has been in existence since 1962.  Last month, facing a lot of debt and withering competition, Shopko filed for Chapter 11 bankruptcy and announced a series of store closures, including the last three Shopko stores here in Dane County.

While I admit I haven’t gone to Shopko very much in recent years, the news of their bankruptcy and departure from Madison and other large and small towns in its footprint left me a bit sad.  I found myself in agreement with a retail industry observer interviewed by the Green Bay Press-Gazette about Shopko’s bankruptcy.  “This one doesn’t surprise me,” he said, “but it’s a company I hate to see go.”  Indeed, while the Walmarts and Targets of the world have run laps around Shopko and other department store chains, it has been a nice place with generally good customer service, and where you can get what you want (cute outfit, comfy boots) or need (toiletries, shoes, dining room set).

END_OF_DOCUMENT_TOKEN_TO_BE_REPLACED

One of the nice things about living in Wisconsin is that the scenery is pretty awesome.  Whether it’s the urban skyline of Milwaukee or Madison, the majestic natural formations of places like Kettle Moraine, or the peacefulness of Door County, this state produces scenes that can be all at once tranquil, exciting, awe inspiring, and breathtaking, no matter what the season may be, including here in winter.  But the beauty of winter is served on a double-edged sword:  The sight of a snow-covered field or wooded area brings serenity, but it’s best appreciated when you’re indoors looking through a window. 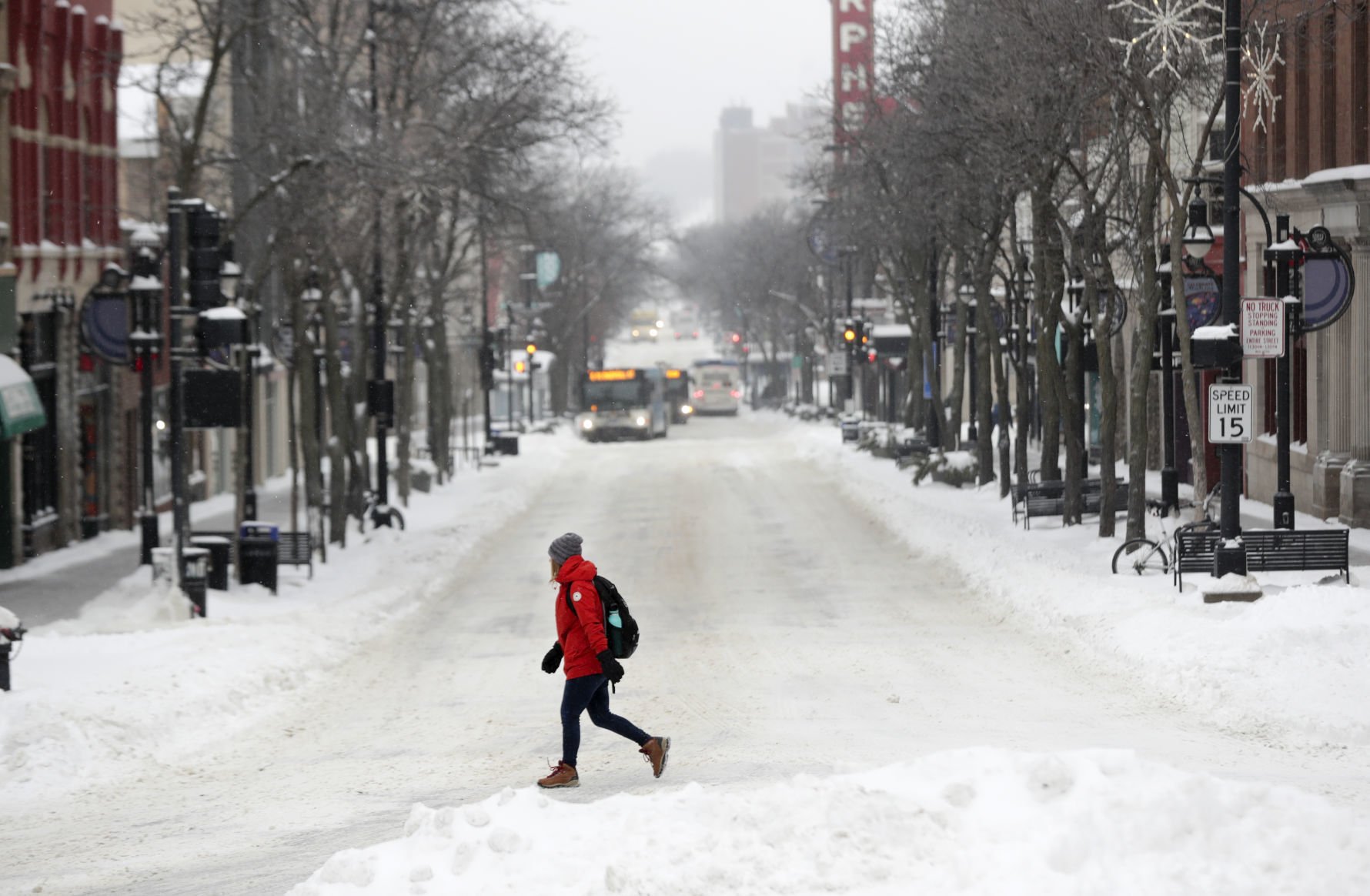 The past couple of weeks here in Madison have brought 3 different snowstorms carrying varying degrees of effect.  The most recent of those storms occurred this past Sunday evening/Monday morning, when we received around 6 inches of snow.

That Monday snowstorm was actually the good news of the week, and not just because the original Madison forecast called for more snow than that.  It ushered in what meteorologists call a polar vortex.  Basically, it’s Mother Nature leaving her freezer door open and letting a lot of chilly air escape.  This week, that vortex of cold, cold air dropped right smack dab onto the Upper Midwestern United States.

END_OF_DOCUMENT_TOKEN_TO_BE_REPLACED 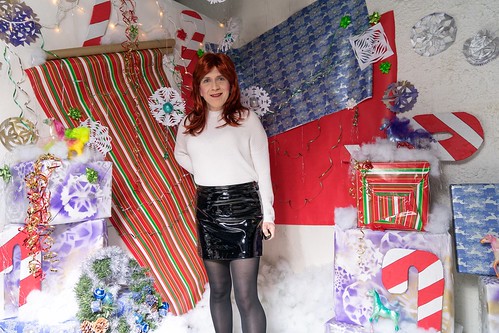 Back in September 2017, I posed for a professional photographer for the first time, doing so before the camera of Katie Berry at Smoketree Photography.  Three months later (December 2017), Katie, her partner, and their friends in the Everyday Gay Holiday art studio/collective on Atwood Avenue threw a holiday get-together for their friends in the LGBT+ community — a “HOLIgay” party.  While I’m not a party person, I jumped at the chance to doll myself up, snack on some food, and mingle with other LGBT+ people from the Madison community. 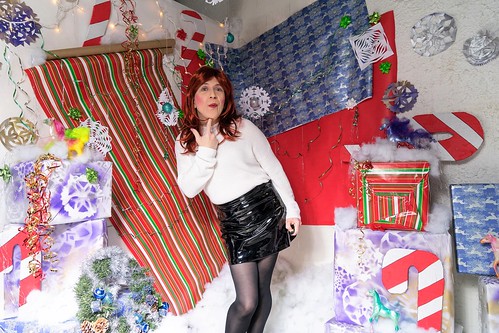 Being the photographer that she is, Katie set up a corner in the studio to let the partygoers use her fancy camera and snap a few free selfies in front of a festive “toyland/horse/holiday/winter wonderland” setting.  Not wanting to pass up a photo opportunity while looking fabulous, I took the remote and snapped a few photos.  There I was in red hair, soft sweater, and patent vinyl Forever 21 skirt, and Katie’s remote clicker in hand, smiling and being all beautiful for the camera. (Oh, the Santa hat was among the available props in the studio.) 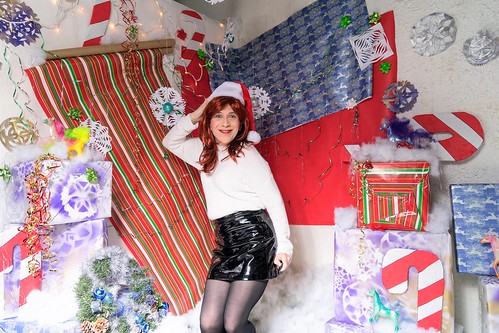