#NP "Don't Give Up" – Peter Gabriel, Kate Bush, and some of the most moving and powerful lyrics I have ever heard.

That above “#NowPlaying” tweet from over 6 years ago is how I commented on the song I want to go into detail in this post:  “Don’t Give Up,” a duet by the English artists Peter Gabriel and Kate Bush.  Before I get into how moving a song this is, have a listen to it first.  Really, listen to it and don’t just watch Peter and Kate in an embrace. 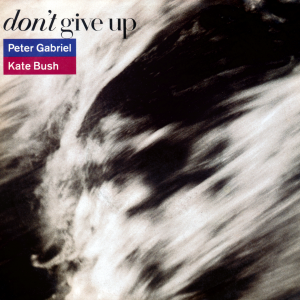 A pretty powerful song, isn’t it?  Though several other pairs have covered “Don’t Give Up” over the years, including for charitable motives (I’ll get to that in a moment), the original Gabriel/Bush version from 1986 still stands out as a sad lament of living in difficult times and receiving support.  And support of some sort is what the man Gabriel sings as needs in this song.

The lyrics and Gabriel’s wearied tone communicate a man who feels downtrodden and isolated, has seen his self-worth decrease precipitously, and is forced to contemplate the forced changes in both his own life and those around him.  Gabriel had two inspirations in writing “Don’t Give Up,” one of which was the economy of mid-1980s England.  Sure, Gabriel himself was secure through his music, but his fellow Brits, especially those in the manufacturing and mining industries and the communities they called home, were being “torn apart” psychologically due to their own jobs being eliminated, thanks to factory closures and the then-government’s alienating policies.  Yeah, losing a job makes one feel discouraged, whether or not you see it coming.  Not only do I know the feeling, I felt it again this year. *sigh*

“Don’t Give Up” also gained inspiration from the iconic photography of Dorothea Lange.  During the Depression era of the 1930s, Lange’s lenses captured poor, displaced Americans caught up in the poverty that was the “Dust Bowl,” perhaps the most famous of them being Migrant Mother.  Peter Gabriel would see Migrant Mother and some of Lange’s other Dust Bowl images in a 1973 compilation book called In This Proud Land.  They reminded him of the aforementioned economic discontent of Britain at the time, and it prompted him to write “Don’t Give Up.”  If you doubt the inspiration from In This Proud Land, listen to the song again, or even read the lyrics, for they are the first four words Gabriel utters.

When listening to “Don’t Give Up,” you definitely notice the low drums, muffled bass, and plaintive synthesizer and piano.  But you also notice Kate Bush’s refrains.  Seriously, this song is nothing without Kate providing the encouraging counterpoint to Peter’s lament.  While a few listeners may consider this duet a back-and-forth between two lovers, you don’t get that from the subtle distortions and dubbing of Bush’s soaring, soothing vocals.  Peter sings as one man dejected and spent and ready to give up.  But Kate sings as multiple composed people:  The lover guiding him down from the ledge.  The friend who is there to support and empathize with him.  The parent advising him to keep going.  The guardian angel who reassures him with the conclusion that “there’s a place where be belong.”

Somewhat contrary to the song’s inspiration, you may notice that there’s only one specific point that actually alludes to a job search (right after the bridge).  No matter, for the strength of this song is the reassuring refrains to whatever the protagonist may be fretting over.  They could be encountering relationship turbulence after coming out, but Kate’s “angel” is there to provide unconditional comfort in the closing lines.  (Well, I shouldn’t have reminded you it was at the 4:55 mark, but if you’ve heard that part even once, you’ll never forget it.  It takes my breath away every time.)

That ambiguousness serves “Don’t Give Up” well in its pull-the-heartstrings power, even if it was just for 20 seconds.  And with that, I get to the “charitable” portion I promised earlier.  First, watch this public service announcement for a teen runaway hotline from the early 1990s.  Yes, it only uses a 20-second segment of the song, but it’s the right segment at the right time for the teenager depicted in the ad.

And in December 2006, a cover version of “Don’t Give Up” was released in Australia, with Shannon Noll and Natalie Bassingthwaighte stepping into Peter and Kate’s roles respectively.  It was a holiday single in support of an organization called beyondblue, which addresses issues with depression and other mental disorders.  While there’s a lot of aural gloss (in the instrumentals especially), there’s something about Natalie’s breaking vocals that are not only reassuring but create a knowing sense, as if to say to Shannon “I’ve been there, and it’s gonna be okay.”

That’s far from the only cover version of “Don’t Give Up” that’s been recorded.  Alicia Keys and Bono recorded it in 2005 to support an organization that aids communities in Africa and Asia affected by HIV/AIDS.  Another charity-oriented version was released in 2008 in the wake of devastating Midwest floods that summer.  Lady Gaga was part of another cover the year after that.  Herbie Hancock had P!nk and John Legend sing it together.  Even Willie Nelson recorded it.  And Peter Gabriel himself rerecorded it a couple of times in live performances.

But in all honesty, no matter how well recorded those versions were, they will never hold a candle to the original Gabriel/Bush version from 1986.  It is powerful in its spare instrumentals, in its sad laments I always sympathize with, and in its uplifting reminders that life will go on and get better.  No matter how tough your own times might be, here’s hoping it’ll remind you that you have at least one angel to fall back on, one who’ll reassure you that it’ll be alright.

One thought on “Allison’s Jukebox: “Don’t Give Up” by Peter Gabriel & Kate Bush”

Yours truly on Gravatar

A crossdresser's thoughts on life, fashion, fabulousness, and (oh yeah) dressing up