It’s been a busy time for me the past few days, so now that I finally have the chance, I wanted to talk about this fine upstanding person and a noteworthy thing she did recently: 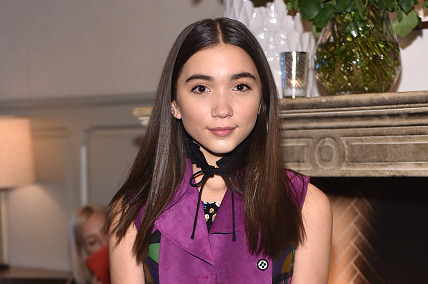 That person is Rowan Blanchard, and, truth be told, that name didn’t ring a bell for me until I heard about what she did… er, uh, said earlier this week (more on that later).  I must admit to my unfamiliarity of her since, well, I’m not part of Disney Channel’s target demographic.  In fact, the only time I usually watch the network is when I’m visiting my young nieces, who are almost Rowan’s age (14).

If any part of your family is within that age range, you probably know Rowan’s name and face very well, as she appears in one of Disney Channel’s long line of scripted family-oriented shows, Girl Meets World.  Does that title seem familiar, fellow grownups?  Well, it is indeed a sequel/follow-up/whatever to Boy Meets World, which ran on ABC in the 1990s.  In fact, Rowan Blanchard, on Girl Meets World, plays Riley Matthews — the daughter of Boy Meets World’s main characters, Cory and Topanga Matthews.

Rather than go on and on about Girl Meets World and who does what on that show (and I’m gonna need a primer on that later), I want to highlight what Rowan Blanchard did… or, to put it precisely, announced the other day in real life.  Rowan came out and told the world she identifies as queer.  Oh, sure, she’s only had a fondness for boys so far in her 14 years on this planet, but she says she’s not one to apply labels of sexual identity to herself, and she doesn’t want to limit herself — or be limited — to dating only one gender by the time she reaches adulthood.

While Rowan’s coming out is all well and good and worth applauding (and with all seriousness, Rowan:  Good for you!), what piqued my interest about her stand is this:  Now speaking as someone who identifies as queer, she’d be thrilled if Riley would come out as anything other than straight, and if not Riley, at least another Girl Meets World character.

If Riley were to come out (and that’s not a sure thing, mind you), that would be a remarkable stand for a network such as Disney Channel.  This is not to be critical of Disney Channel, but the general themes of the network’s programming have been, historically speaking, rather innocuous.  It’s an understandable tone to take for sure, as the network has always been a lighthearted respite for children from the difficulties of the world and the dark corners of the TV dial.  But consider that some of their shows have centered on a girl with psychic abilities, kids living in the lap of luxury (not once but twice), a kid with a side career as a super spy (not once but twice), and a family dog who’s an amateur psychologist (and can type).  So, yeah, Disney Channel is not usually one to let meaningful plot lines get in the way of a lighthearted premise.

But there’s something about Girl Meets World and the possibility of it having a queer regular character that may certainly shake up Disney Channel’s content mold a good way.  I suggest this for two reasons:  First, reviewing some of the show’s episode synopses, one discovers that Girl Meets World has already dared to bring up meaningful subject matter:  Gender equality, family backgrounds, acknowledging the underprivileged, even Asperger’s syndrome.  It may seem all “very special episode” to us adults, but a lot of early teens and pre-teens could learn something there.

Secondly, Rowan Blanchard has dared to express opinions about important issues away from Girl Meets World‘s soundstage.  Whether it’s in online essays or interviews, she’s discussed topics that most grownup-oriented sitcoms would never even think about touching:  Intersectional feminism.  The exclusionary influences of “squads” (a term I’ve never heard of before).  Being accepting of yourself.  Not apologizing for who or what you are.  Mind you, Rowan is only 14 and yet has dared to talk about those topics in profound, sometimes blunt terms.  Indeed, Rowan seems wise beyond her years… dare one say even more wise than any presidential candidate.

Sure, Rowan Blanchard is not the only person to eschew labels and take stands.  Indeed, she isn’t the only Disney Channel star/alum to go that route.  Miley Cyrus, for one, identifies as fluid when it comes to her sexuality, though she first expressed that long after she hung up Hannah Montana’s blonde wig.  But not only is what Rowan saying quite powerful, it’s when she’s saying it:  She’s still in her early teens, still a Disney Channel star, and part of an age group that is generally more open to sexual fluidity.  That last fact, and the changing times in general, may blunt any impact of a character like Riley coming out.  But if it were to happen (“if” being the key word there), and if it were to happen on a teen-oriented sitcom such as Girl Meets World, it would certainly break new ground.  Sure, more serious youth-oriented shows such as Degrassi have long dealt with sexual identity issues among its younger characters, but it’s not often that the issue has been given the “Puppy Episode” approach (i.e. “Let’s have a laugh about it”).

So, will Riley Matthews be this generation’s Ellen Morgan?  Who knows if it will be the case.  But at least the actress playing her should be applauded for expressing her true self, and being articulate in doing so.  Way to go, Rowan!